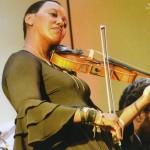 Recently, Dr. Devreaux was a soloist on the score of the hit show ‘Have and the Have Nots’ (OWN TV and a Tyler Perry show); a violinist on Justin Timberlake’s new CD ‘The 20/20 Experience’ (she played with him in the 2013 Grammy Awards as well) concertmaster of her own String Ensemble for the hit TV Show ‘The Voice’ 2011 and the lead violinist for the 2011 Grammy Awards with young artist, Bruno Mars/B.O.B. In 2008 she was one of the violinists for Aretha Franklin’s Performance at President Obama’s Inauguration.

No stranger to big name celebrity musicians, Ms. Devereaux has appeared as a solo violinist at the Hollywood Bowl with Stevie Wonder, Hank Jones, Gerald Wilson, Joe Lovano, Kenny Burrell, and others Furthermore she made a special solo appearance with the ‘Disco Diva’ Donna Summers at the Hilton and MGM Hotel in Las Vegas.

Dr Devereaux continues to appear on numerous recordings. Some highlights include Barbara Streisand’s CD “Love is the Answer”, and the ‘Colors of Christmas’ Tour Starring Peabo Bryson, Stephanie Mills, and others. She also worked on Alicia Keys CD “As I Am” as the lead violinist in New York. You can also hear Ms Devereaux as a featured solo violinist on the CD ‘Detroit’ by the Great Jazz Legend Gerald Wilson and his orchestra.

Just as strong as a classical musician as any other style, Ms. Devereaux has served as Principal Violinist for Opera Great Luciano Pavarotti in Las Vegas at the Caesars Palace and has toured with Andre Bocelli.

Dr. Devereaux received her violin training from Earl Carlyss (Julliard String Quartet), Anne Thatcher, and John Sambuco, among others. She earned her Bachelor’s degree in Violin from Chapman University.